You want the man of Christ, here it is. You want the God of Christ. Here again. Pound is the best at this. This poem has the attitude of Psalm 2 nailed. Without a doubt this captures our Lord’s attitude toward His enemies.

Ballad of the Goodly Fere
Ha’ we lost the goodliest fere o’ all
For the priests and the gallows tree?
Aye lover he was of brawny men,
O’ ships and the open sea.
When they came wi’ a host to take Our Man
His smile was good to see,
“First let these go!” quo’ our Goodly Fere,
“Or I’ll see ye damned,” says he.
Aye he sent us out through the crossed high spears
And the scorn of his laugh rang free,
“Why took ye not me when I walked about
Alone in the town?” says he.
Oh we drank his “Hale” in the good red wine
When we last made company,
No capon priest was the Goodly Fere
But a man o’ men was he.
I ha’ seen him drive a hundred men
Wi’ a bundle o’ cords swung free,
That they took the high and holy house
For their pawn and treasury.
They’ll no’ get him a’ in a book I think
Though they write it cunningly;
No mouse of the scrolls was the Goodly Fere
But aye loved the open sea.
If they think they ha’ snared our Goodly Fere
They are fools to the last degree.
“I’ll go to the feast,” quo’ our Goodly Fere,
“Though I go to the gallows tree.”
“Ye ha’ seen me heal the lame and blind,
And wake the dead,” says he,
“Ye shall see one thing to master all:
‘Tis how a brave man dies on the tree.”
A son of God was the Goodly Fere
That bade us his brothers be.
I ha’ seen him cow a thousand men.
I have seen him upon the tree.
He cried no cry when they drave the nails
And the blood gushed hot and free,
The hounds of the crimson sky gave tongue
But never a cry cried he.
I ha’ seen him cow a thousand men
On the hills o’ Galilee,
They whined as he walked out calm between,
Wi’ his eyes like the grey o’ the sea,
Like the sea that brooks no voyaging
With the winds unleashed and free,
Like the sea that he cowed at Genseret
Wi’ twey words spoke’ suddently.
A master of men was the Goodly Fere,
A mate of the wind and sea,
If they think they ha’ slain our Goodly Fere
They are fools eternally.
I ha’ seen him eat o’ the honey-comb
Sin’ they nailed him to the tree.
Ezra Pound

I agree with this wholeheartedly
From the desk of Dave Ramsey to Washington D. C., April 15, 2009 Let the prophet speak. Well said:
“I want my money back!!” “You know, when you go into a store, you go into a restaurant, or you go into some situation where you get crummy quality, and they don’t take care of you, and they abuse you as a customer, and the money that you spent-well, you feel ripped off. What is it that you say to the manager, the owner of the establishment, the person running the operation. You look at them and you say “I WANT MY MONEY BACK!!’” “Now you might start off nice at first. But if you’re not getting somebody’s attention at first, eventually you’re going to raise your volume, because you have had enough as a customer that’s been ripped off. You’re sick of the misbehavior of this establishment. And the guy operating this thing-well, you want a refund.” Well, that’s how a whole bunch of Americans feel about their government right now-me included. I want my money back. I want my money back. It’s mine. That’s no whining. That is a moral statement regarding private property rights. I want…my money back. It’s mine. I earned it. I served people and helped people, and they paid me in return and it was my money. If you cut someone’s grass and they pay you for cutting their grass and you do a good job, good, that’s your money. I don’t want that money. I didn’t earn that money. You served someone. You earned that money. If you operate a restaurant and you feed some people, and you do a good job, well, then, then you’ve earned your money. If you operate computers and you build computers, and you’re Bill Gates, then that’s your money. That’s Bill Gates’ money. I don’t want Bill Gates’ money. That’s his money. And if I get to keep my money, you know what I’ll do with it? Because I am a moral person. A person with a value system. Because I already do this with my money, and so I have a proven track record in that regard, and so do most Americans, by the way. I will give it to help others. And as a businessperson, if I have more money, you know what I do? I grow my business. You know what that means? It means I hire more people. Now this is really not rocket science, and this is not political theory, and it’s not one liners coming off of some[one]’s political platform, who hadn’t never made a payroll. (Imitating Republicans) ‘Well we have to have small businesses be able to have access to credit or they can’t make payroll.” These were the kind of moronic statements made by Republicans in the fall. It was a talking points bulletin that went out to the Republicans. “We have to shore up the economy, because the credit is frozen, and the small businessmen can’t operate,” which is an indication that you people are freaking idiots. You have no idea how a small business operates. And then chiming right along beside them, using the same lines, oddly enough, were the Democrats, and Hank Paulson, whose shall forever, by God, remain a memory. I want my money back! My grandchildren and my great grandchildren haven’t even been born yet, and they already want their money back! They already feel ripped off! “Cause they already have been. I want my money back. For the rest of this rant, which is amazing, see the link to this video on my Profile. I agree, I want my money back. 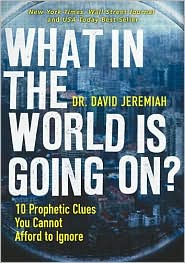 Finally, after getting my computer back up…here is my review on David Jeremiah’s book, “What In the World Is Going On?: 10 Prophetic Clues You Cannot Afford to Ignore,” without the theological jargon, except where defined.

First of all, Jeremiah does a good job of tying together some factors I had not previously thought of that help us clue in that these are the end times, especially US dependence on foreign oil, Islam, and terrorism.  And without getting to technical, as many end times authors get, he explains these themes in such a way that I felt compelled to keep reading and understood what he was saying.  I finished it in about 14 hours.  Jeremiah’s position (which states the church will be removed from Earth before the “Tribulation Period” begins-read Daniel 7 for more on this) gives him the chance to interpret the current events with insightful but disturbing results. It was an exciting and engaging read, on the point of interpreting current events.

Having said all this, Jeremiah’s perspective, called Dispensational, Pretribulation Rapturism appears to stretch the biblical evidence farther than warranted.


Definitions
Dispensational-in end times studies, Dispensationalism sees the letters of Revelation 2 and 3 to the seven churches as symbolic of seven ages of the Church, and that we are currently in what are called the “Laodecian Age,” where the faith of many is lukewarm and uncommitted.


Pretribulation Rapturism-The Church, will be taken away before the earth experiences a period of unprecedented suffering.  Pretribbers like to take Revelation 3:10 as their banner verse to prove this, and also argue that the church is nowhere to be seen in Revelation.


The trouble with this perspective is that it not only does violence to the texts where Christ said we will “have many tribulations,”  among other key passages on suffering for the sake of the gospel.  Also, it seems to disregard the simplicity of other biblical arguments, such as the one that other passages talking about “the trumpet of the Lord” could be talking about the same event.  Because of this, Jeremiah and other pretrib works, such as Left Behind, need to be read with a large grain of salt and that we should be ready to suffer more readily than to expect God is going to save us simply because He told believers in Philadelphia (Rev 3:10) that He would save them.


Now, before anyone goes on about how the pretrib position is required in order to take the doctrine of the Immanent Return of Christ seriously, which is a can of worms I will open later, I would respond that Christ can come at anytime he wishes, but then again, my faith is not shaken if the Antichrist appears before this takes place.  Moreover, we will not know and have the revelation of the Antichrist before he stands in the temple, etc.  The real question we should be asking is “would our faith be shaken if no pretrib rapture occurred, but rather we were faced with tribulations and testing.


For a sum of my views on endtimes, I will save that for another post.


One other issue among many that Jeremiah fails to resolve is, when discussing Islam, even though He says Allah and the God of the Bible are not the same God, he fails to offer any solution as to how missionaries, like myself, can resolve this issue and effectively minister to the Muslim people.  Because of this, the chapter on Islam felt like a drive-by backhanded treatment of God’s love for the Muslim people with no solution for Christians who have a heart for these people.


Also, his chapter on the Jewish people, made me feel, as a non-Jew (I do not take the label of Gentile), as though I were a second-class citizen in the kingdom of God.  This is an inherent weakness in many dispensationalist writings, in that they do not take Romans 11:17-24, Galatians 2:38, and especially Ephesians 2:11-17 seriously.  We are grafted into Israel’s heritage by the Spirit, There is no Jew, Greek, or any other in Christ, and the middle wall of partition and the hostility between the Jew and the non-Jewish believer have been broken down and put to death respectively.  Jeremiah and his ilk seem to wish to establish that wall again.


In conclusion, as intriguing as the issues were that Jeremiah raised up, I felt like he left a number of loose ends tied up. For the purpose of missions, evangelism, and outreach, all of which are required to happen in order for the end of the age to come, he gave us no solutions to the challenges posed to reaching out effectively to our Jewish and Muslim brothers.  As excellent as the issues mentioned and current events highlighted, it was highly dissatisfying, leaving me hungry for answers to all the questions that he raised, especially with my heart for Muslims.


I received this book compliments of Thomas Nelson Publishers for my honest review, and was disappointed.
And the link to the book is here.